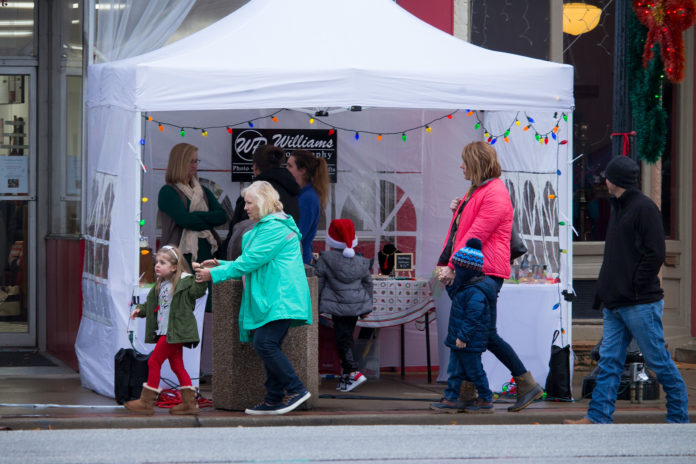 Residents of Woodruff didn’t let a little wet weather stop them from enjoying the Christmas Stroll event downtown. Despite a fairly constant drizzle, vendors set up in tents in front of businesses along Main Street and shops kept their doors open late for the festive event.

The Woodruff Community Center set the mood with Santa and Mrs. Claus available for pictures with the young festivity seekers. The photos were taken by Like Mother Like Daughter photography. Vendors and volunteers inside the Center offered goods such as handmade holiday pillows and a Woodruff cookbook called A Taste Through Time. Out on Main Street vendors under tents sold goodies like homemade soaps, custom apparel, jewelry, and other gifts.

Rotties 221 Biergarten and Humble Grounds offered refreshments for those seeking solace from the drizzle. Other stores that stayed open for the event included Peachy and Posh, The Yellow Butterfly, and HIP Resale.

Representatives from area churches including the First Presbyterian Church of Woodruff and First Baptist Church were also in attendance.

Notable faces included many of the City’s officials and employees including Benny Morgan, Alyson Smith, Brad Burnett, Joe Ortiz, and Kenneth “Turk” Gist. Unofficial city historian Ben Teague, who administers the Woodruff, SC Our History Told Facebook Group, made his rounds documenting the event. The night was capped off with an appearance by the Elf on Stilts.

Once again Woodruff residents proved that it will take a lot more than a little inclement weather to stop them from heading out to support their city. 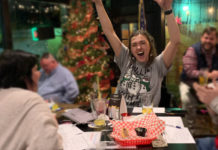 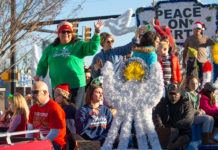 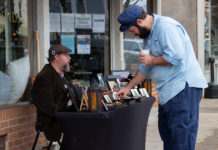