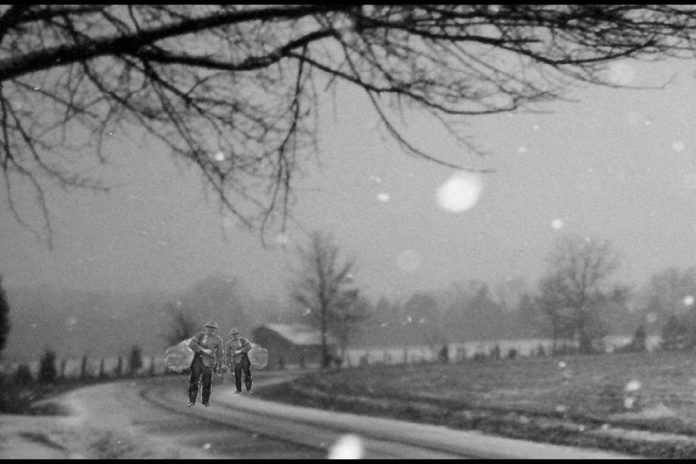 Our mother was a story teller, this is another one she would always tell us around this time of year. I only wish she was still here to help with the details.

The war was still going, so Dad hadn’t made it home from Europe yet. It had been about 3 years since had “shipped out” to England. Mom and Pete were again living with Uncle John Gwinn, Aunt Edna May, and their young daughter Imogene. Also again living in the Switzer community at the “Lytie Littlefield House”. At least that’s what our family called it. Up the road toward Woodruff on the right was Homer Meadow’s place. Back down the road across Fergerson creek and on the left was the Switzer Church of God. Beyond that was the “Old Brick House” (Price House now) where Jehu and Granny Sue Fortner lived.

This was back when most churches held a Christmas Eve Service and Switzer Church of God was no exception (Christmas Eve services have since become sort of inconvenient). Every Christmas Eve the little Switzer church was packed with people. The service, friendly and informal and always with a Nativity play by the younger kids, a modern day play about the meaning of Christmas by the teens and younger adults. Next came the exchanging of gifts and finally the passing out of those large bags of fruit. Included here is a picture taken in the 1970’s 1980’s but would have also been pretty typical of how the pews were packed even back in the 1940’s. Sometimes the doors were left open so others could see from the porch.

Back in those days, the bags of fruit would have been a very big deal, After I was old enough to remember, seems like the fund raising for that would begin around October. I think Barney Fortner would have been preacher then, seems like mother said he was. Anyway after the money was raised and a few days before Christmas Eve, Preacher Barney Fortner and his brother Brown would negotiate a fruit purchase from a grocery in Spartanburg. Several men of the church would then usually meet the day before Christmas Eve and put together the fruit bags. These were the large 10 pound bags and were always completely full (bananas, apples, oranges, tangerines, pecans, walnuts, Brazil nuts, peppermint sticks, Snicker candy bars and of course Hersey silver bells). The ladies would have decorated the tree by then and so the fruit bags were arranged around and under the tree. The scent of cedar and fruit filled the church. And so the preparations and Christmas Eve service like clockwork happened for all the years since before I can remember. With one exception (about 3 years before my time) that was December 24, 1945 when the following appeared in the Spartanburg Herald Newspaper.

And in fact it did happened, Snow and ice covered the upstate (for some reason back then weather forecasts were fairly accurate but not very timely). This meant there would be no Christmas Eve service, no plays, and no fruit bags. The service and plays could be postponed but the fruit in the bags wouldn’t last until the roads were passable again. The snow and sleet was already falling. God’s men, Barney and Brown would have to act fast. These two were tall, stout and accustomed to hard work. Perfect for the task at hand (Mr. Jehu and Granny Sue Fortner kids were all tall and stout even the girls).

Meanwhile down the road from the church at the “Lytie Littlefield House”, Mother, Uncle John, and Aunt Edna May, would have been preparing for the weather. Getting in fire wood, drawing water, sealing up the old house the best way they could (yea, life was tough back then). Uncle John may even have been stuck at his job in Spartanburg (he didn’t own a car back then). These were survivors of the “Great Depression” and they did what was necessary. Especially Aunt Edna May, she was a real pioneer woman, always planning the work then working the plan. I’m sure if she had time for a motto it would have been “Be Prepared”. By late afternoon, sleet and snow had already covered the road making the 3/4 mile walk down to the creek and back up the hill to the little church just about impossible. I’m sure Little Imogene and Pete were bouncing with excitement since it was Christmas and snow was falling. I’m also sure the adults were a bit disappointed since the Christmas Eve service was always uplifting and those large bags of fruit were a special treat too. For some of the church members and friends, that bag of fruit was all they would get for Christmas. With the chores nearly complete and just as evening was approaching there was a knock at the door. You probably already guessed by now; yep, it was Preacher Barney and His brother Brown with those bags of fruit (doing God’s work on a very inconvenient day).

This was their last stop so they warmed and rested by the fire just a short bit explaining their travels along back roads. At first their day started fairly easy since Brown owned a car they began the deliveries with it. Soon it slid into a ditch and was stuck. They walked back home , got the mule and wagon, loaded up and again headed down those roads (not roads like we think of today, instead these were red clay with deep ruts). Next they explained when the day was just about finished with just one more delivery something else happened. Just as they started up the hill (from Fegerson Creek) toward the last house, the mule gave out and refused to pull. So for that last house, the bags of fruit were carried by hand. After the rest and a short prayer (Preacher Barney always prayed before he left your house) they walked back down the hill. The mule had recovered somewhat so they slowly walked him home. I’m sure everyone they met felt the Spirit of Christmas that day. These two men who obeyed God made a difference. Now it has been 76 years and most of the people that know of this story have long since passed. I just wanted to pass along what Men of God will do on a very inconvenient day.